Since I have been toilet training my son, to use the toilet, I have come across some useful Tools to help.

Portable toilet seat, I spoke about this on my other site:

There are many different forms but they are great and would recommend them. 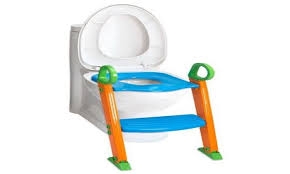 I would recommend carrying baby wipes still, so you can wipe the seat whilst out.

The other tool I have used, is using books and Youtube videos. Here is an example below of the books and videos you can watch that can help.

Books are a great way to get your child ready for toilet training.

Here is a really helpful video about Potty Training, too by Emily Norris.

I hope you find this information helpful and if you have any toilet training tools then please share I’d love to hear from you.

I can’t believe how fast it has gone and how much my son, Henry, has grown.

He is now toilet trained, even though he still wears a nappy at night and been debating weather to or not to put one on when he naps during the day.

Please do not judge me on that, but his naps during the day are becoming less frequent aswell, and he will often have a dry nappy, so I try to leave the nappy off during the day as much as possible. He is a sleep at the moment, but he has been awake since 3am this morning, so was bound to be tired this morning.

That is one thing that has changed his sleep pattern. We try not to allow him to watch his tablet for too long, and he is very good at getting himself to sleep, but he won’t always be asleep for long, and does often wake up during the night.

Sometimes he will nap in the car aswell, but he doesn’t have a nappy on when we are out, and he will use public toilets now where before he wouldn’t. We have been  using our portable toilet seat, see my blog “Toilet Training Success” blog on my website for further details about this:

Here is a photo of my son on the swings, when my mum and I took him to Selsey for a couple of days. He walked a lot when we were in Selsey only sitting down a few times, but we didn’t use the pushchair once.

We still use the pushchair, but we are trying to phase it out, and when he starts school next week I will have him walk there.

I still can’t get my head around the fact that he will be at school next week, and I am a little anxious about it. He hasn’t settled to the thought of school well so far, and when I took him to his moving up day, he didn’t want to leave my side.

It was only when he saw there was a water play area, that he started to play and settle a bit, but then he saw the entrance doors open and tried to escape a few times.

He does love other children, especially older ones, and loved playing with his cousins in Selsey and even held their hands to walk along the seaside. He loves older children, and couldn’t stop watching them when they came out to play, on his moving up day.

I think once he sees other children playing and having fun, I think he will then settle into school. We are still teaching him to pull his trousers up and down, which he can do. Well he can take them off, no problem, just pulling them back on he struggles with, and it will be doing them up again, that he may find tricky.

I have been teaching him more about his name, and how to identify it. At Henry’s nursery they now lay out green leaves out with each child’s name on them and they have to put them on this tree attached to the wall, and I encourage Henry to find his name and put his leaf on the tree, and he will do it.

I think that is a brilliant thing to do, to teach children their name.

Henry loves Playdoh and will often have my mum’s Playdoh set to out to play with, and is happy for a long time. He loves kinder eggs, and we often when we go shopping have to buy him one, otherwise it can be world war 3.

It has gone so quickly, since the first day he was born, and he seems to develop more each day. I am so happy about the toilet training, just need to keep on with the getting the clothes on, as he loves being naked, and getting him more used to seeing his name.

So I will post again soon, probably coming up to his next birthday, but until then many thanks for reading,